Reflection is a powerful tool- one that goes unwielded so often in the flurry of planning and doing that generally fills our busy days. I noticed that if I wanted to spend time harnessing that power, I would need to develop purposeful structures that would help to cause it to happen. To that end, I’m experimenting with this “Top Tweets” series.

Following the reflection gained by looking back at a year’s worth of tweets in 2014, I thought it might be interesting and helpful to increase the frequency of those reflections, to go back on a monthly basis and expanding on the ideas of the “top tweets” of each month. While the depth of “A Year In Review” can resurrect powerful ideas, I think I’d much prefer keeping these ideas at the forefront of my mind much more frequently.

Here's what each of us said our #oneword for 2015 would be during 1/4's #sunchat (note: may not be comprehensive) pic.twitter.com/69NpK34vJh

Most every Sunday morning at 9AM ET, a group of passionate educators come together for #sunchat, a free-form educational chat moderated by New York educator Starr Sackstein. Ultimately inspired by the book One Word To Change Your Life (though more likely by the twitter zeitgeist, which was #oneword-ing all over the place at the time), Starr challenged each of us to choose and commit to one word that we hoped would embody the year to come, and to share it during the first #sunchat on 1/4/15 along with the hashtag #oneword:

What's you're #oneword for 2015? Please share it here join #sunchat tomorrow at 9am ET to discuss http://t.co/k7caLNYKN9

I find these types of chats to be extremely energizing- especially those focused on springing forward into a new year. In the hour that followed, educators from around the world inspired me with their drive and enthusiasm around the practice of teaching and learning. By the end, I didn’t want it to stop, though I knew that it would have to if we were ever going to make our #oneword become reality.

Seeing the collection of tweets, I remembered a couple of different approaches to using word cloud generators as an artifact of learning, which I thought might be interesting to capture our #oneword posts. Thankfully, #sunchat is always full of motivational energy:

Do it! RT @tborash: @KyleneBeers @Dr_LMR Could be a cool addition to import the #oneword responses into Wordle to visualize #sunchat

And so, the Tagxedo image of our #oneword discussion on #sunchat was born. PS If you’ve not used Tagxedo before, I’d recommend it- a word cloud generator similar in nature to Wordle, but with the added functionality of allowing you to customize more of the features (including the shape).

Side note: The #oneword strategy itself has been a rejuvenating one, both for me and for those with whom I work. My #oneword during this #sunchat was “reawaken,” which helps me remind myself that each day is a gift I need to embrace, and that there is a larger world outside of the short-term goals that govern my day-to-day life that I need to see. When I shared it, one chatter asked, “Have you been asleep?” My response: “In a metaphorical sense, I think maybe I have been.” Here’s to waking up in 2015! 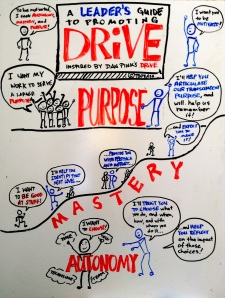 Each year, edtech leader and blogger Scott McLeod celebrates the “birthday” of his blog with a call to educational leaders to join as a PLN and share their ideas around leadership. Today (Friday, August 15, 2014) is the eighth-such celebration, known on twitter as #leadershipday14. (Learn more about on his blog at Dangerously Irrelevant.)

Here’s my addition to the fray: an image that I’ve wanted to draw for upwards of a year about how educational leaders can promote teachers’ internal motivations based on the principles of Dan Pink’s Drive.

I may write more about this later, but for now I’ll let the picture speak for itself. Thanks to Scott for inspiring us all to share our learning!