Earlier this evening, I read a colleague’s blog post discussing the concept of making data-informed decisions as opposed to data-driven decisions.  It’s a thoughtful post, one I hope you will read in depth.

The post brought out a response in me that unearthed some Sherlock Holmes quotes I thought I had forgotten. (Read the comment, if you’re interested in the quotes themselves.)  There are a couple of images that seem to sync up well with the idea from the response, so I figured I’d put them up here for posterity’s sake: 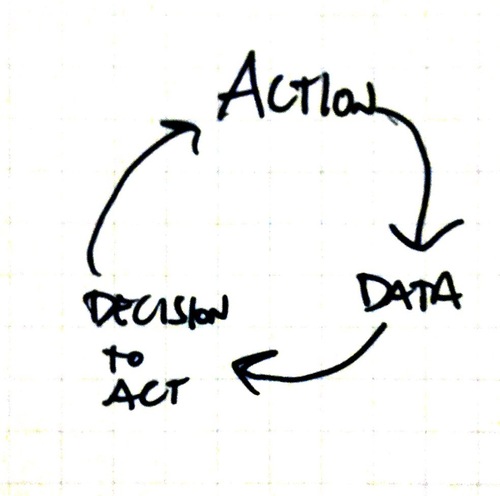 These images are meant to be viewed in succession, almost as an evolution.  The 1st image depicts the concept of a data-driven decision as Steven describes it in his blog: data leads to our decision to act in a certain way, and those actions lead to new data.  What this idea is missing- and what Steven asserts- is the process of thoughtful reflection that occurs when you consider not just the data but also the perceived reasons for the data.  In the 2nd image, the data has informed those reasons, and those reasons then drive the decision on how to act.

The 3rd image adds a level of balance into the system as drawn from similar diagrams in Senge’s Fifth Discipline.  In this cycle, our decisions are still driven by the reasons for the data, but here the data is the perceived gap between the actual results and those we expected.  In other words, we’re not necessarily asking ourselves the question, “Why do we see the data we see?” but rather, “What is the reason for the difference between what we see and what we thought we’d see?”

Given time, there would probably be several more iterations of this image- I hope your thoughts will help to continue to shape it into something better than it is today.  Thanks again to Steven & Rich @ Teaching Underground for inspiring the response.